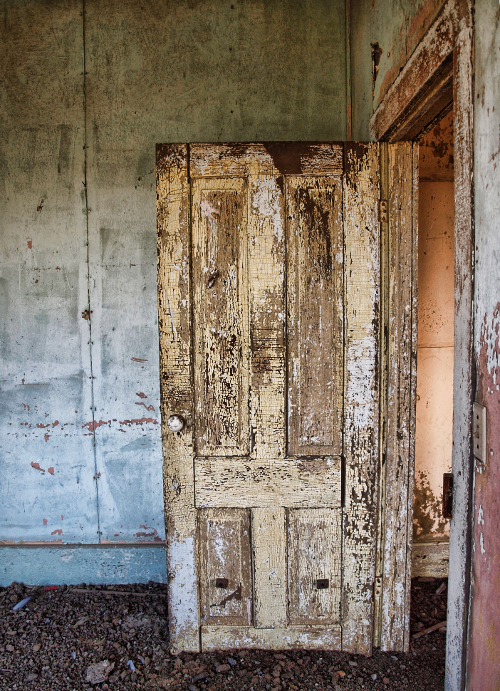 I first discovered the yellow door in the spring of 2011 at an old, abandoned farmhouse in Central Washington. 2011 was a particularly painful year for me: it was the year my husband and I fought to keep our friend Honey from committing suicide; and it was the year my health took a sharp turn for the worst, plunging me into the same deadly realm of despair that Honey herself was struggling with. Even after we succeeded in saving Honey and she moved away to Idaho, I continued to spiral dangerously. Her brush with suicide opened deep wounds in my heart, whispering insidious lies that death provided the only true escape from my own pain.

During this time, I found that I could not write directly about what I was experiencing, although writing had always been a solace in the past. Instead, I turned to poetry to express the deepest cries of my soul, veiling the bleak reality of my life with whimsical images and elegant turns of phrase. The yellow door appeared in the first of these poems, and over the next year as I continued to wrestle with suicidal tendencies, it showed up again and again in my poetry–often without me being consciously aware of it. Over time, the yellow door became a symbol in itself, a kind of mental shorthand for a place where I felt safe enough to tell my story, even if only in the most figurative terms. As my heart began to mend, it also grew to mean a place of healing, one that does not ignore or sugarcoat the darkest aspects of life, but finds peace in them regardless. Like the abandoned farmhouse and the real yellow door itself, this is a place where all that is broken and desolate can be honored for its paradoxical beauty: the elegance of peeling paint and tattered cloth, the vibrance of rusted metal, the resilience of even the most shattered heart. And all these years later, it is still the place that tells my story when no one else will listen.